Demokratizatsiya contributor Donnacha Ó Beacháin has traveled extensively in Central Asia and observed numerous elections in the region. The photos he shares here provide insight into the democratic process as it operates in Central Asian states and highlight turning-points in the region's history. 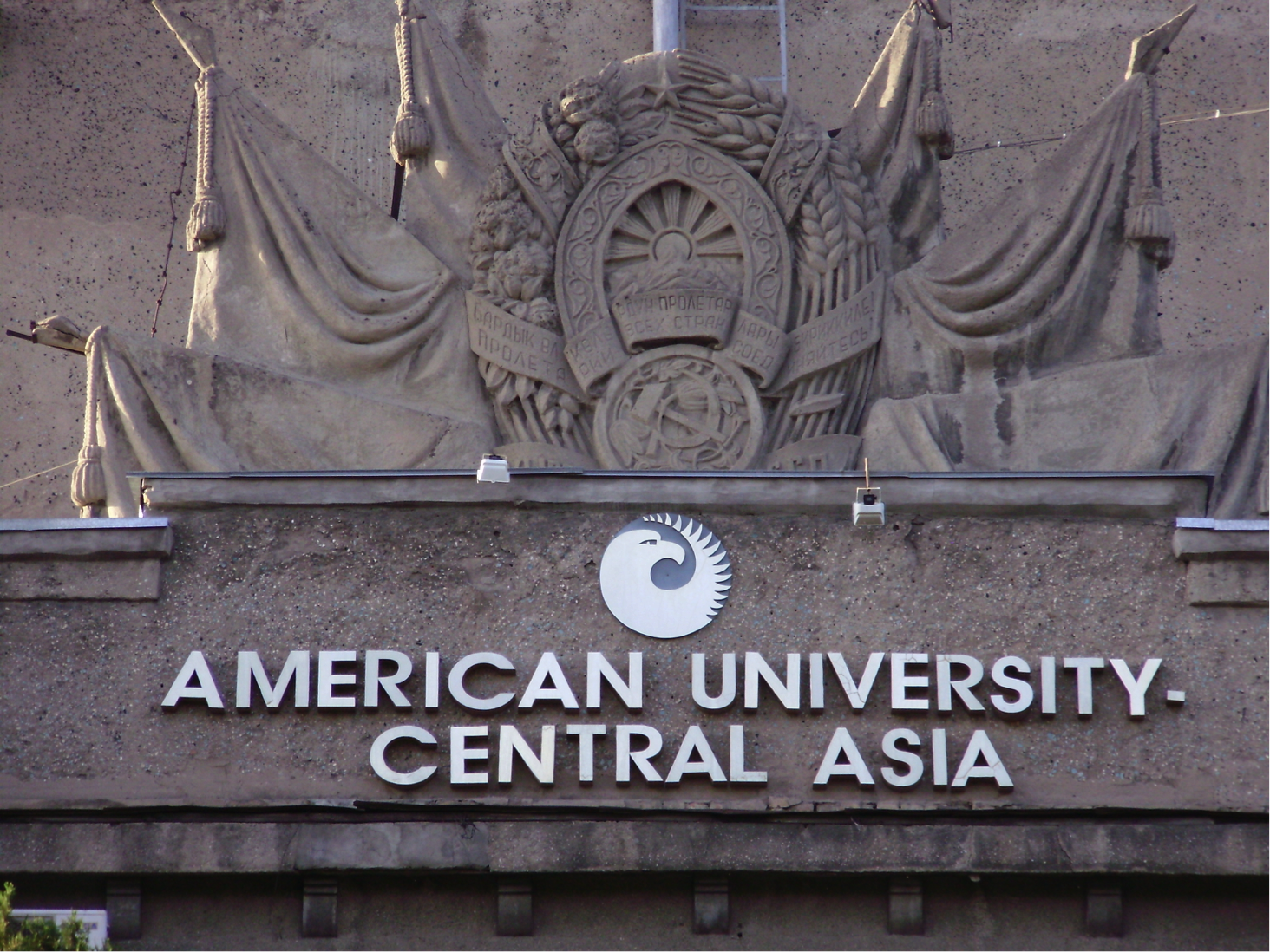 This photo captures an important aspect of life in Central Asia - the modern façade built upon Soviet-era foundations. Here is the American University of Central Asia, which operated from the same building used during Soviet times to house the Communist Party’s Central Committee. Behind the shiny but flimsy university name sign, one could clearly see the older Soviet-era façade, replete with hammer and sickle. 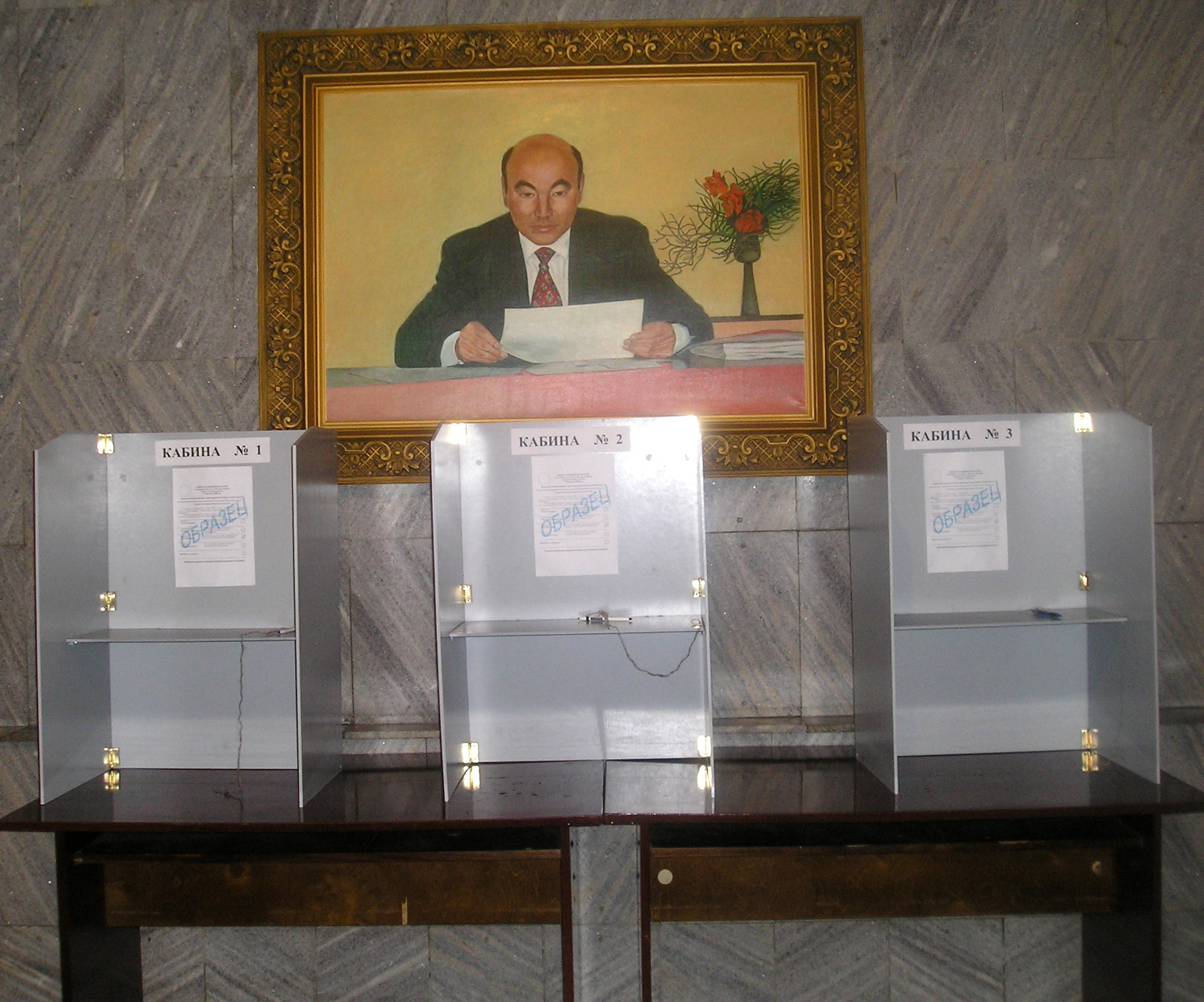 In February and March 2005, Kyrgyzstan held two rounds of parliamentary elections. If voting intentions were unclear, one could always glance up at the portrait of President Askar Akayev for inspiration. 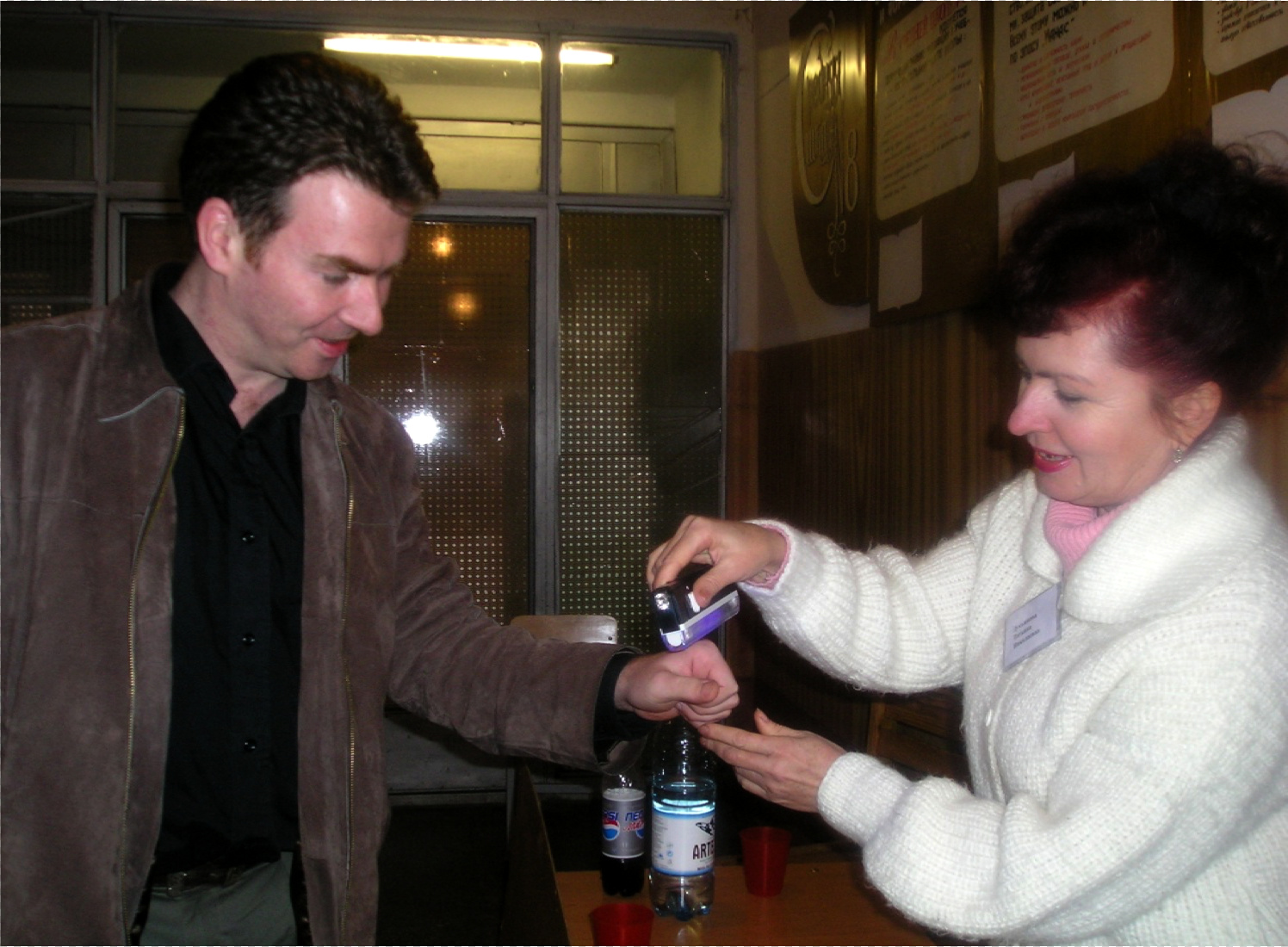 At this polling booth I received a demonstration of the latest technology designed to prevent voter fraud.  Electoral rigging was rife, however, and led to widespread demonstrations. 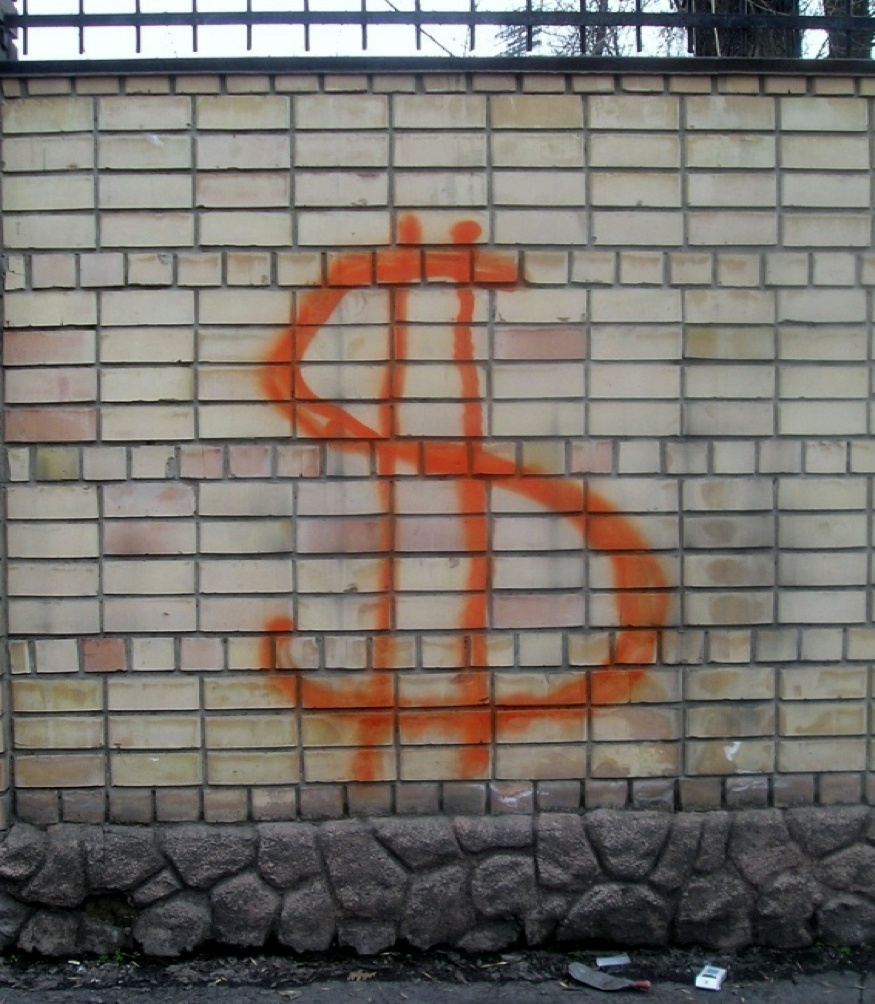 Government supporters claimed the protests were inspired by the Ukrainian "Orange Revolution," and funded by foreign actors; hence the large orange dollar daubed on the wall protecting the Soros Foundation in Bishkek.

I found myself in a small room with virtually nobody present as Kurmanbek Bakiyev [center, seated] announced an alliance to challenge President Akayev and the election results. Key allies were Azimbek Beknazarov [pictured on the left] and Ishengul Boljurova [pictured on the right]. It seemed an inauspicious gathering but a few weeks later, Bakiyev had taken power and appointed Beknazarov as Kyrgyzstan’s Chief Prosecutor, along with Boljurova as Minister for Education. Akayev’s overthrow was quickly dubbed the “Tulip Revolution.” 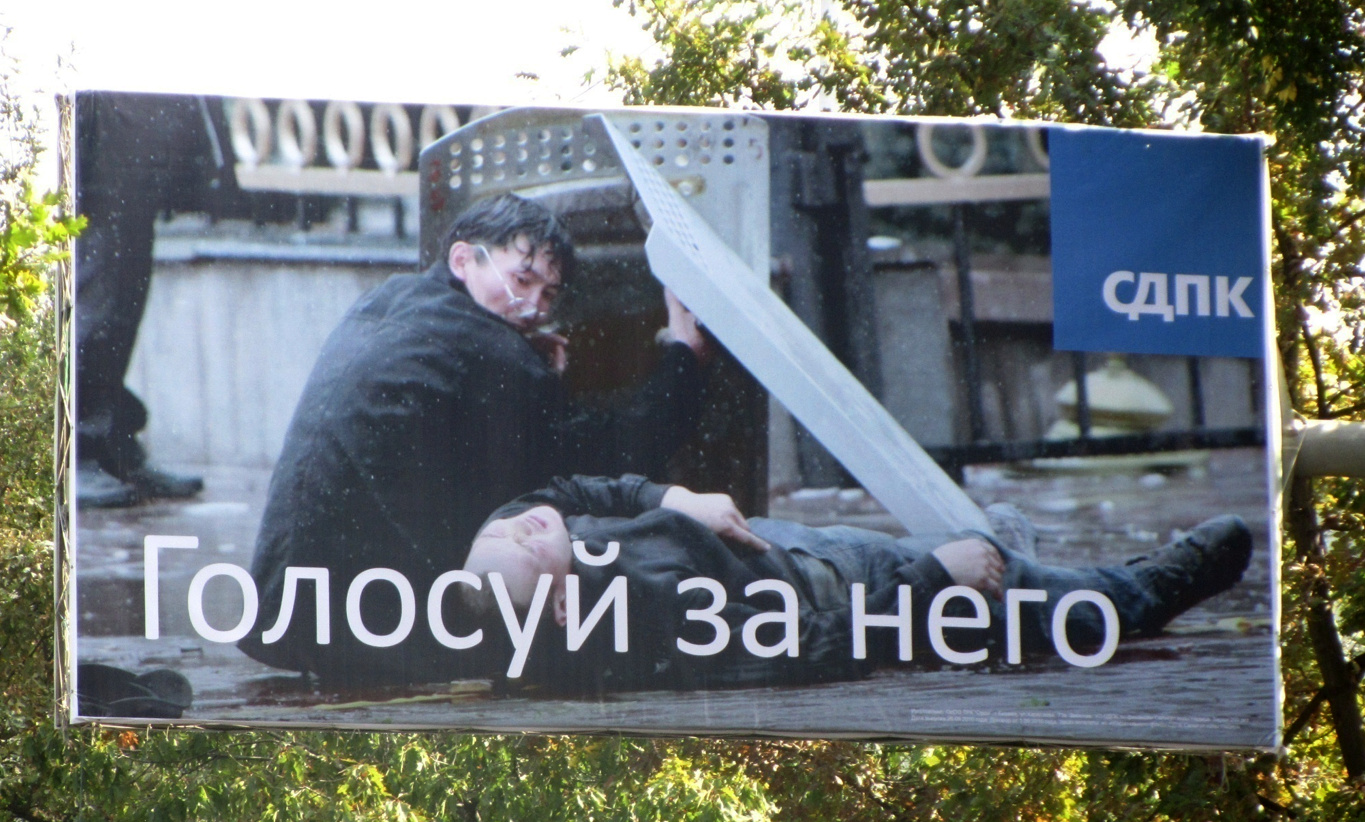 Bakiyev was banished five years later and violence engulfed the country during the first half of 2010. I spent almost a month in Kyrgyzstan that year and observed the parliamentary elections in October. The billboard, urging the electorate to "vote for him" makes reference to those killed in the disturbances leading to Bakiyev’s ouster. 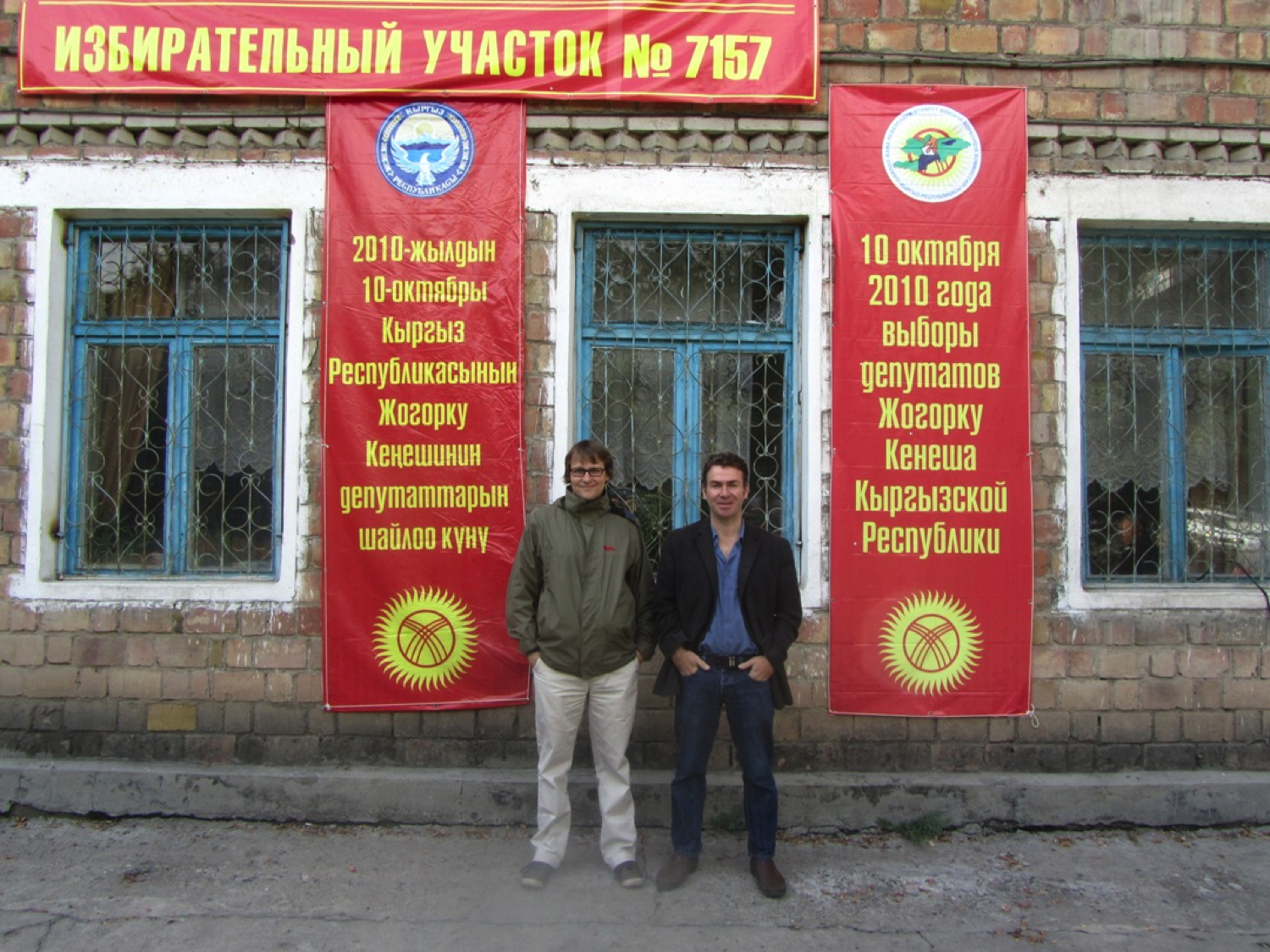 Outside a rural polling station with Jussi Niemeläinen, correspondent with Helsingin Sanomat. It is Election Day (10.10.2010) as Kyrgyzstan moves to a parliamentary system in an attempt to break the cycle of upheaval that had expelled the previous two presidents. 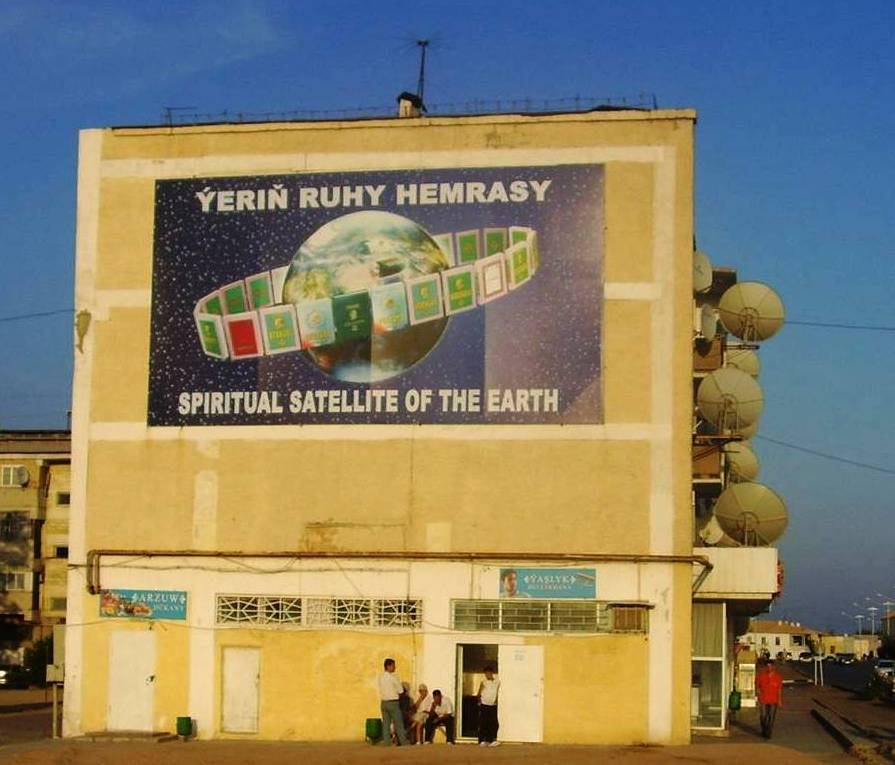 Propaganda praising the President of Turkmenistan’s book, Ruhnama. The name of the city where the photo was taken (“Turkmenbashi,” meaning “Leader of all Turkmen”) matched the title the President had bestowed upon himself. 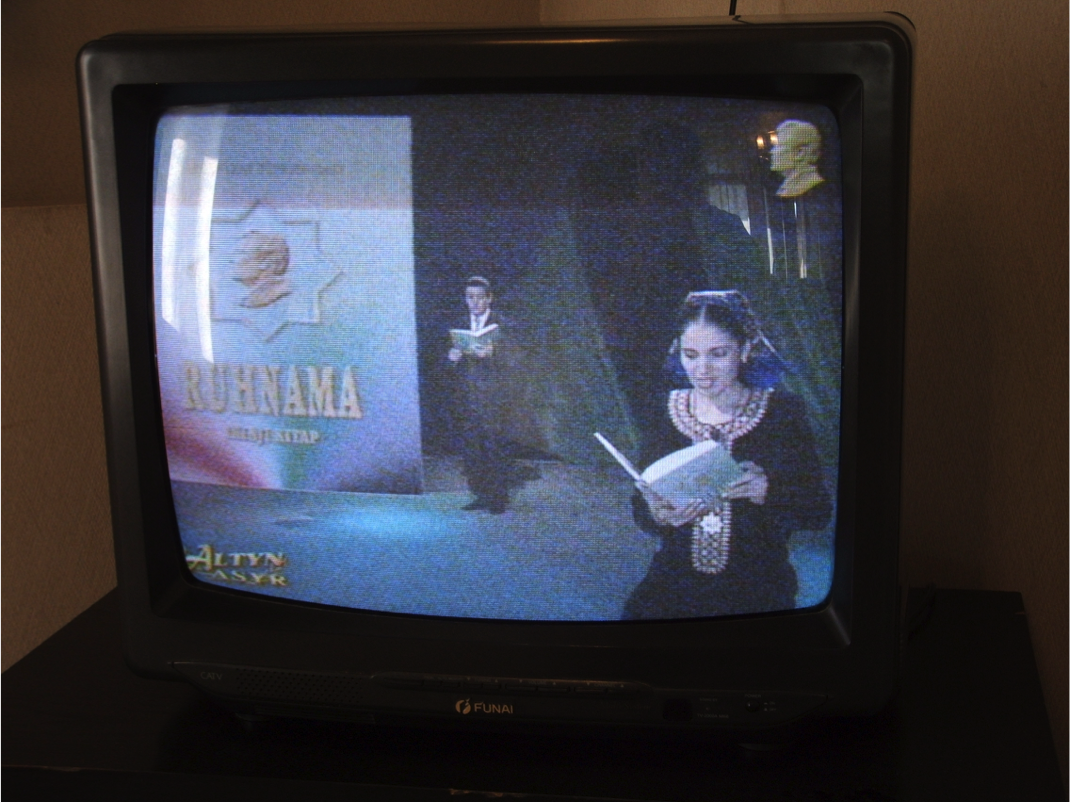 Watching television in Turkmenistan’s capital, Ashgabat. The state channel had two individuals taking turns reading the President’s book. The subsequent programme was devoted to carpet makers talking about the tapestries they had made in honor of the President. 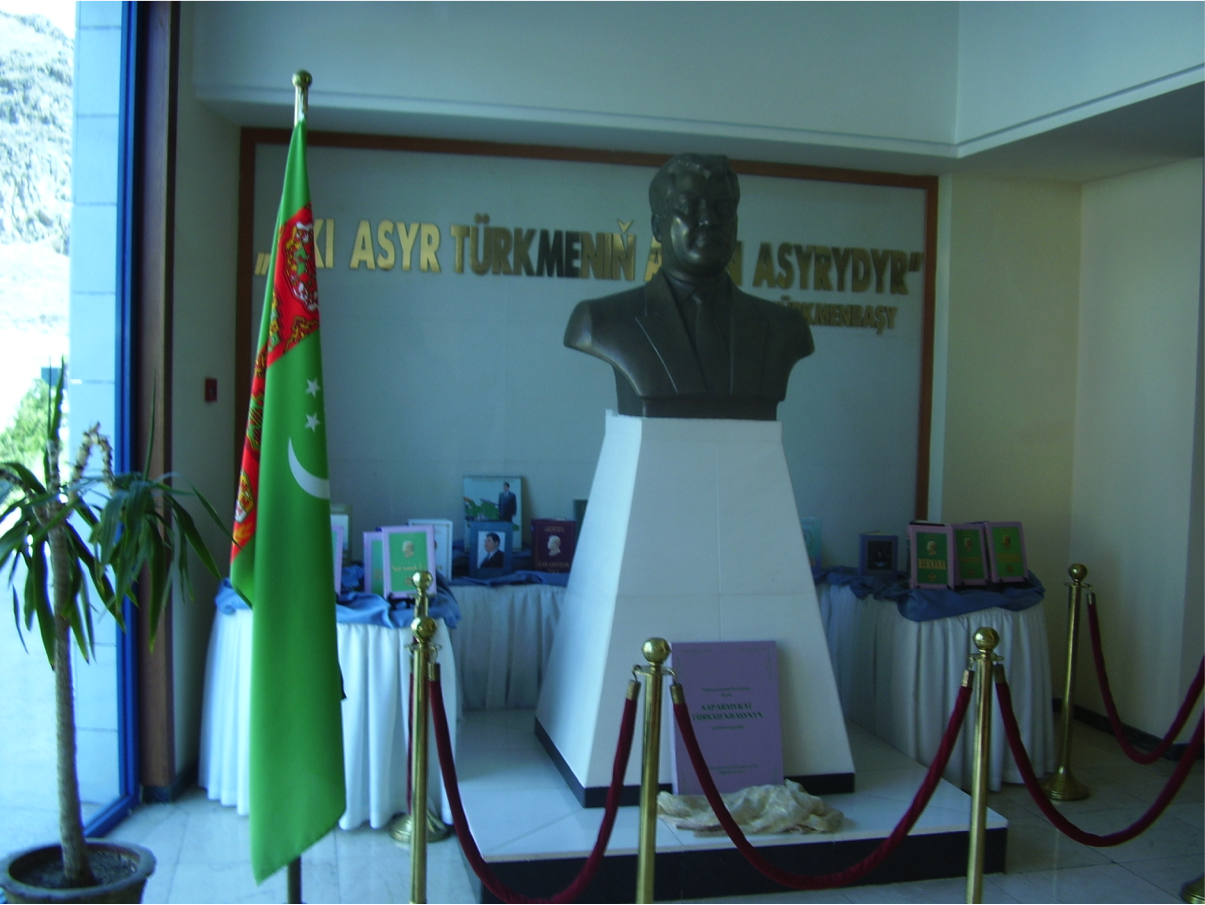 A typical hotel lobby in Turkmenbashi is a showcase for the many books attributed to the President. The current head of state, Gurbanguly Berdimuhamedov, has maintained this personality cult; state media proclaims that he has "authored" over 40 books since taking power a decade ago, including 7 books in 2016 alone. 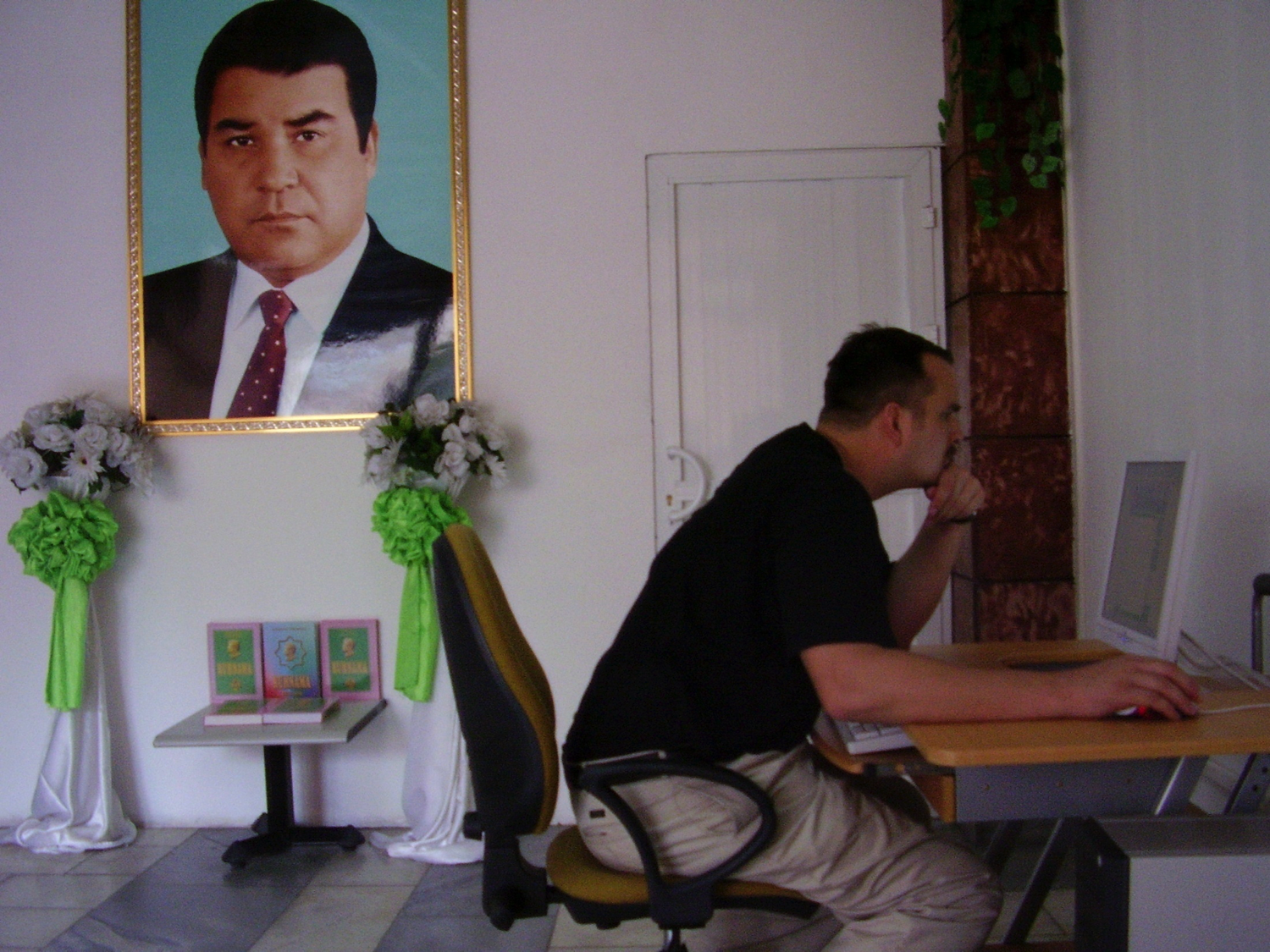 Turkmenistan’s first internet café opened in 2007 to great international publicity, and reportedly signaled a new openness following President Niyazov’s death. The café had four computers, was very expensive, and internet speeds were extraordinarily slow. You also had to hand over your passport to be allocated a computer, located beside a presidential portrait and copies of his books (useful to read while waiting for web pages to download). Not surprisingly, the place was always empty. Pictured is my travelling companion Kristopher White, who has written extensively on Central Asia. 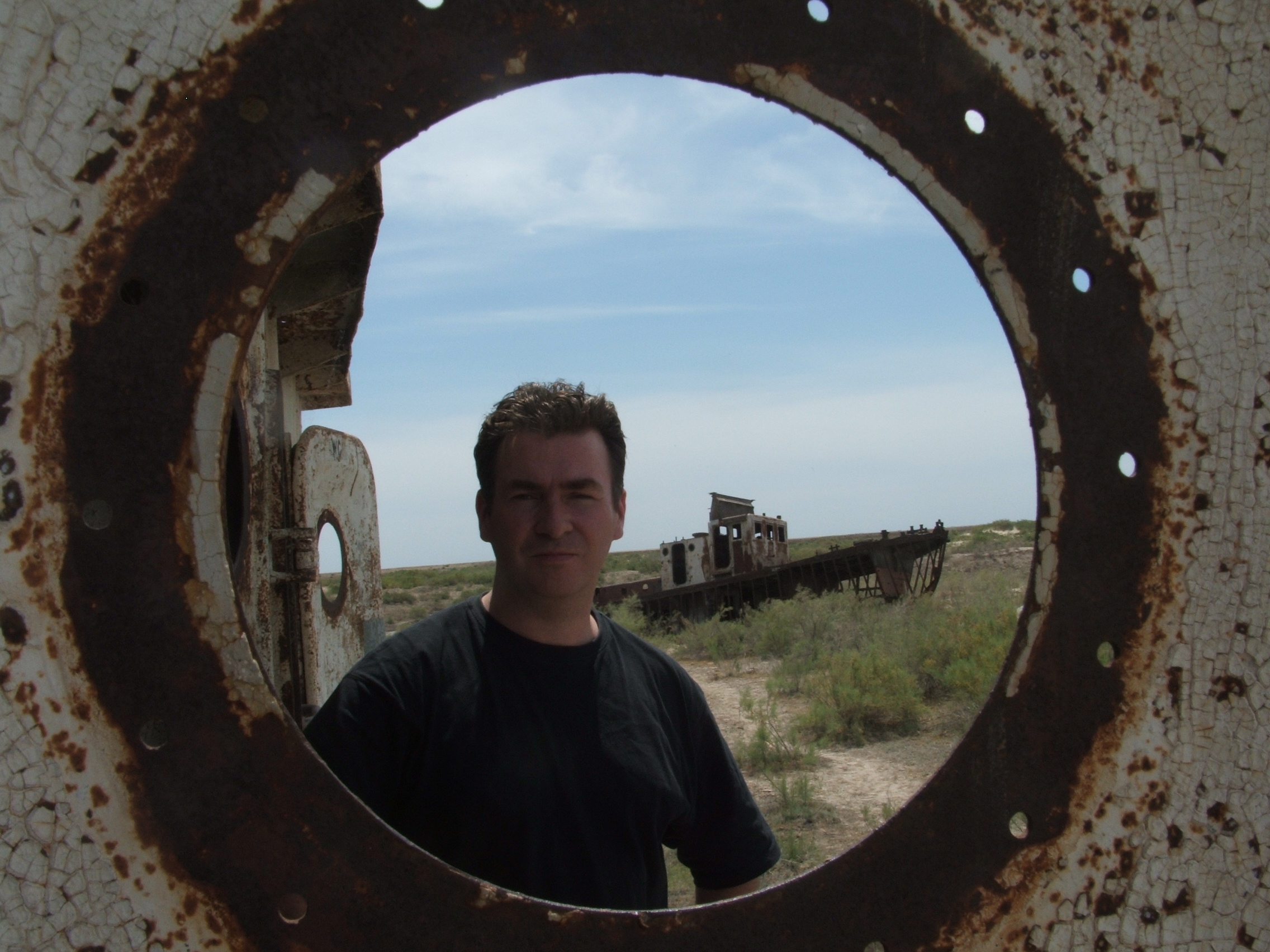 Straddling the boundary between Kazakhstan and Uzbekistan, the Aral Sea was once the world’s fourth largest lake. This picture was taken on one of the many deserted boats close to Moynaq, a once bustling port city in Uzbekistan, which is now a ghost village dozens of kilometers from the receding shoreline. One might say that the desert mirrors the political landscape in the neighborhood.

If you enjoyed this feature, please let us know! Email Editor Robert Orttung and Deputy Editor Ellen Powell at demjournal@gwu.edu or fill in the contact form on the home page.